Joe wrote:
Mach: "A thought experiment is an imaginary experiment."

If I am CAPTAIN OBVIOUS, then you are CAPTAIN OBLIVIOUS.

JoshingThySelf wrote:
Things called thought experiments DO exist and they are indispensibly useful in philosophy and science. QED. I'm not repeating this again you fuckin pathetic moron.

exist
To have actual being; be real.

imaginary
existing only in the imagination or fancy; not real; fancied.

Do "Things called" King Friday, Queen Sara and the Neighborhood of Make-Believe exist as a real king, as a real queen and as a real neighborhood - OR - does any reference to these make-believe (thought) things as real things absurdly fail?

If imaginary experiments exist in reality, then the imaginary King Friday, the imaginary Queen Sara and the imaginary Neighborhood of Make-Believe exist as a real king and a real queen ruling over a real neighborhood - not as sock puppets and cheap scenery in a PBS kid's show. 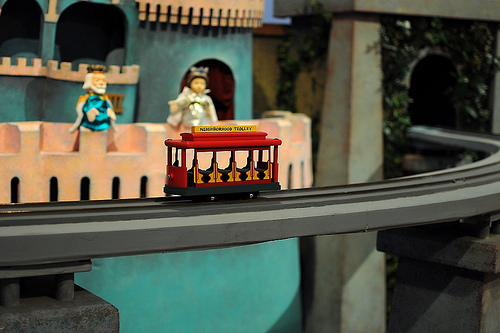 Mr. Rogers was a flake, but your wacky assertion that things existing in reality and thoughts existing only in the imagination exist but are somewhat different would have sent the old boy reeling-into spams of uncontrollable laughter, instantly culminating in his premature death.

JoshingThySelf wrote:
No one, especially not me, has claimed that there's no distinction between empirical, scientific experiments and thought experiments. They're distinguished by the word THOUGHT, you fucking obscurantist pile of shit.

Prefixing the occult-word "THOUGHT" to a word which picks-out a set of human actions playing-out under the objective conditions in the world (experiments) does distinguish an imaginary, THOUGHT experiment from an empirical, scientific experiment, but that is not what you are attempting to say.

Is the Easter (THOUGHT) Bunny distinct from a real bunny?

JoshingThySelf wrote:
Thought experiments exist. They are experiments in the form of thought.

Is an imaginary (thought) god an existing god? You cannot be consistent in denouncing Christians for believing that their (imaginary to you) God exists - when you believe (against +110 years of this phrase's use) that imaginary experiments exist. You've committed a base-line, logical error, confounding the imaginary with the real and the real with the imaginary. It - almost - makes more sense for a god to exist "in the form of thought" - than it does for an experiment to exist "in the form of thought". A god is spooky; an experiment is the polar-opposite of spooky.