"Philosophers should seek to dissolve confusion, functioning much like logical-draino on all sorts of intellectual blockages. They should not be complicit in enlarging these clogs. The obfuscation and distortion of elementary ideas, concerning the nature of the reality, are best suited to the politicians and their stooges in the media."


The guards and administrators of this Auschwitz-of-the-mind cult seek to convince themselves that - with their minds alone - they can alter the physical conditions of the world; however, all that's been achieved is that a weird sort of control over how the world can be spoken of has been laid-down and enforced. Those having brains enough to contest the rubbish-notion that on a Myspace group, reality can be trumped (that by equivocating bio-terms, sexual selection leaves insect species untouched and that 400 years of physics are potty as constants are actually inconstants) have left or become pariahs.

A similar, though less extreme thinking-cramp pervades politics. The ideas that many politicians express do not fit how the world is arranged. Here's a charming example. In the words of the horrible Prime Minister of Great Britain Gordon Brown:

Given the level of cannabis consumption in the UK (higher than the US) - should it cause lethal episodes - evidence for this claim would appear. It would manifest itself in the form of (among other things) corpses piling-up, morgues busting at their seams and fresh graves proliferating. All with an intact sight would witness these outcomes with their own eyes. No doubt about the supposed lethality of pot could be (rationally) denied. Should the consumption of pot cause death, many of the former pot-people would only be found - stiff in their graves.

Politicians make obscene claims about things happening in the world, and these claims are (usually) adopted as true by the media and by the majority of a nation's citizenry - despite these things not happening. Their counter-realism runs: Even though something does not happen, it happens. A claim about the world is true - despite (or because) of the claim being false. No correspondence, no link, no correlation between the politicians' words and events, operating in the world, is (generally) required to gin-up support for their wretched policies.

Politicians cannot be held - soley - to blame for their adherence to counter-realism. It's in their power interests to convince their inferiors (those whom they rule) that the workings of the world are down-right spastic. However, it is - fatally - against the interest of their lessers to sign-onto the world-view. It maximizes the probability of their remaining inferiors. Should you wish to point the finger of blame at someone for this thinking-cramp in politics, look into the mirror then point to yourself. If politicians are not corrected when they insist that the intrigues - which pollute their minds - negate the objective conditions known to exist outside of them, they'll insist that their ideas overcome reality.

The Brown's, the Norton's, the Khuno's, the Jerry's, the Nate's and the JoshingThySelf's dangerously occult world-view can easily be put to test. We might dig a pit, tossing the above merry-makers into it - along with a small fission bomb - set to detonate 3 minutes after sealing them up. If their understanding of the world is correct, the above mental-giants should be able to prevent the bomb's blowing-up by thinking so hard about it that its uranium atoms will not split, e.g. by redefining what the word "fission" means perhaps. If there are no physical constants, filling the universe - as has been insisted in this Myspace group, then our pit-men need not fear. The bomb would not explode - as constants must operate in the universe for it to explode - notably "c" and "h".

If, on the other hand, should the pit-men fail to prevent the blast, I don't see what could be spoken of as even a trifling loss... 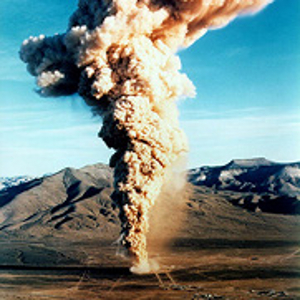